In our series “The History of Writing and Reading,” we looked at many different writing systems that developed (and sometimes died) over the milennia of human history. There is another system – perhaps better called a communication system than a writing system – that developed during the height of the Incan Empire (1400-1532). It is composed of knotted and braided cords called “khipus,” and archaeologists are still debating the exact information encoded in each cord.

Many scholars suspect that the khipus primarily recorded accounting information using decimal numbers. However, documents recovered from the Spanish, who conquered the Incans, indicate that while some of the khipus did record census totals and astronomical events, others contained messages that runners carried from one place to another.[1][2]

In 2013, archaeologist Alejandro Chu made a discovery that at least partially altered thinking about the khipus. Working at an Incan storage facility in Peru, he and his team found 29 of the knotted cords covered by regional crops, primarily peanuts and chili peppers, something they’d never seen before. Uncertain as to the meaning of the find, Chu contacted Harvard University archaeologist Gary Urton, who traveled to the site for an up-close look. Together, Chu and Urton concluded that the Inkawasi khipus, as these are called, recorded a tax taken from food that local communities sent to the state-run storage center, and it is the first evidence, the researchers claim, that the Incans taxed goods; until this point, no one had found proof of such taxation in the Incan Empire.[1] They published their findings in the March 2019 Latin American Antiquity.

The relative newness of understanding the khipus’ meaning belies the fact that research on how numbers were recorded on these strings dates back almost 100 years. Typically, a number of thin, twisted cords, arranged in tiers, hang from thick, horizontal cords. Bottom-tiered knots record 1s, the next highest level records 10s, and so on. However, the Inkawasi khipu cords and knots are not like anything seen from other Inca sites. Instead, the researchers argue, the knots represent what amount to simple numerical equations, represented as a = b + c, with any of four fixed values assigned to b. To clarify: “In one case, a peanut khipu recorded a large value of 13,328 followed by a fixed value of 208 and four other values that, with 208, add up to 13,328. In other words, a = b + c.”[1]

Still, this is not a complete explanation of the khipus’ function. Some of the knotted cords include dyed strings woven into the pattern, some in light colors and others in dark colors. Archaeologist Jon Clindaniel, a former graduate student of Urton, believes the colors may represent Inca record keepers’ credit and debit calculations for the communities that stored produce at the facility. He suggests that light-colored cords stand for addition, while dark-colored cords stand for subtraction. When both cord colors were used, the result could indicate a mathematical operation, such as “+ 90, – 15 = 75.” This would allow for the accountants to record credits and debits while tracking which communities had paid taxes and which still owed money. This theory has not yet been confirmed. 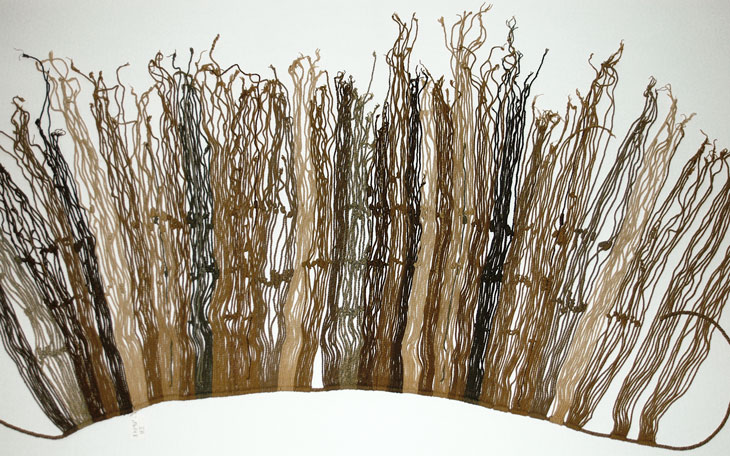 Sabine Hyland, another anthropologist studying cord meaning, came to a different conclusion after examining two late-18th century khipus found in a box at San Juan de Collata in the Andes Mountains. There are 95 cord combinations, made up from different colors, animal fibers, and ply directions. Her analysis of the Collata find leads her to believe that these combinations signify symbols that convey a message, with the initial hanging cords representing the message’s subject matter.

The 95 different knots and colors represent a much greater number of combinations than found in the accounting khipus, and they also fall within the range typical of a logosyllabic writing system. It is her opinion that artifacts of such complexity presuppose a writing system, most probably a logosyllabic one. Her conclusions support an oral story told by Collata villagers that the khipus she unearthed are sacred writings between two local chiefs regarding a late-18th century rebellion against the invading Spanish.[3] If both assumptions are true, then the Incans of this time period used the cords as their means of written communication. She has been able to decipher a name from one of the cords based on the villagers’ information.

Hyland’s work has both supporters and detractors. Anthropological archaeologist Penelope Dransart of the University of Wales Trinity Saint David in Lampeter contends that Hyland makes an “excellent case” that these cords represent syllables and probably words as well. On the other hand, while Gary Urton believes Hyland’s conclusions are “profoundly significant,” he’s convinced they won’t help to decipher the cords’ meanings. He believes that the villagers probably came up with a phonetic form of khipu communication when the conquered Incas were exposed to the alphabetic writing of the Spanish conquistadors, and he asserts that the khipus show no combinations corresponding to any particular speech sounds before that happened.[2]

Perhaps the biggest takeaway from all this is that all the research and all the deliberations give us the possibility that, one day, we will decipher the code completely, and in the process discover yet one more form of writing in the history of humanity, one not duplicated anywhere else on Earth.