[Editor’s note: This is the tenth of an ongoing series that examines the rise of writing – and therefore reading – around the world. We will be looking at the major developments and forces that shaped the written languages we use today. Links to all the previous posts are listed at the end of this one.]

Classical Nahuatl was the language of the Aztec Empire, and it was one of the primary languages spoken in a large part of Mesoamerica from the 7th century CE until the Spanish conquered the region in the 16th century. Nahuatl is part of the Uto-Aztecan language family, a group originating in the western United States and Mexico that also includes languages such as Shoshoni. Modern-day Nahuatl (there are currently about 1.5 million speakers) has many different dialects, not all of which are mutually intelligible; the dialects spoken in the Valley of Mexico are closest to Classical Nahuatl.[1]

When the Nahua arrived in the Valley of Mexico in the 14th century, the area had already been settled and divided into city-states. They started by building their primary city, Tenochtitlan, in the marshes of Lake Texcoco, at the same time absorbing much of the culture of those around them. As a result, the Aztecs, the best-known group of the Nahua, may have adopted a writing system that had been used for many centuries before their arrival and shared by many nations in Central Mexico.[1] Conversely, many scholars believe the Aztec writing system was invented a mere 200 years before the arrival of the Spanish and continued to be used until about 100 years after the conquest, finally disappearing in the mid-17th century. As support for the latter theory, Aztec phonetic signs and logograms all derive from the Nahuatl language, and the script, therefore, appears to be an Aztec invention designed to record that language.[2]

Unlike the Mayans, though, the Nahua did not have a full alphabet. Nahuatl was originally written with a pictographic script, which served only as a mnemonic device to remind readers of texts they had learned in an oral fashion. It then evolved into a mixture of ideographic and phonetic scripts, where the same symbols were used for each system, but where context determined the meaning. This has made it more challenging to translate parts of the Nahuatl codices. An example of a Nahuatl symbol being used to represent a word or idea is the use of a scroll in front of the mouth to represent either “speech” or “speaker,” as in the Codex Mendoza below.

Nahuatl most resembles Mixtec writing in that both used dots for numbers less than twenty (instead of the bar-and-dot notation used in Mayan and Zapotec), both had a similar construction for compound signs, and both favored short texts with painted scenes to describe a narrative instead of using longer texts. It is quite possible that both Nahuatl and Mixtec were both influenced by earlier writing systems of cities such as Xochicalco, Cacaxtla, and the even more ancient Teotihuacan. Today, Nahuatl is written with a mixture of traditional and Latin characters.[3]

The Aztecs wrote primarily on perishable media such as deer-skin and paper codices. Due both to the consequences of age and to the purposeful destruction of books by both the Aztecs and the Spanish conquistadors, we have no examples of pre-Columbian books. All known documents containing Nahuatl writing were created after the Conquest, and they contain a mixture of Aztec glyphs and Spanish notes, also known as glosses. These glosses give us the ability to interpret and understand the parts and meaning of the Aztec glyphs.[2]

Nahuatl writing had three primary functions: to mark calendrical dates, to record accounting and mathematical calculations, and to list names of people and places. As with other Mesoamerican scripts, most of Nahuatl writing centered around a set of calendrical signs and a numerical system based on the number 20. The most important calendrical cycle observed by the Aztecs was the 260-day sacred calendar, called tonalpohualli. It contained two parallel and interlocking cycles, one of 20 days (represented by “day signs”), and one of 13 days (represented by numbers called “coefficients”).

Aztec numbers, unlike many other Mesoamerican systems, were represented almost exclusively by long sequences of dots on manuscripts and on stone monuments. This system, which was feasible for calendrical use since no number ever exceeded 20, was highly inefficient when dealing with accounting, especially since the Aztec Empire needed to record the large amounts of tribute it demanded from its provinces. The Codex Mendoza (a portion of which is shown above), contained a section on such tribute. To count items greater than 20 efficiently, the Aztecs used glyphs for the numbers 20 (a flag), 400 (a feather), and 8,000 (a bag of incense), as shown below.

A number of highly pictorial logograms were used to write down personal names, names of places, and historical events. For example, the Codex Mendoza recorded many instances of the Aztec army conquering other cities. To show that a city had been conquered, its name was written next to the “conquered” glyph, depicted as a pyramid in smoke and flames with its top falling over. To reinforce the point, Aztec warriors were drawn with captives taken from the conquered cities.

The Nahuatl language is polysynthetic, meaning that compound words and long phrases are constructed from roots and affixes. Aztec names were written as groups of highly pictorial logograms that make up the name’s root. The glyphs were then joined together or even sometimes combined into a single glyph (known as conflation) to show they formed a compound word. Sometimes, however, it was difficult to visually depict a concept in a graphical form. That meant, in certain cases, a logogram had to be used for its phonetic value rather than for its meaning; in this way, it could represent another root, suffix, or syllable(s) that sounded identical or similar to the logogram. This process is referred to as rebus writing. Unlike most rebus writing, however, which uses the full sound of the root, phonetic glyphs were always single-syllable, taking their value from the first syllable of the word the logograms represented. This process is called the acrophonic principle, and it is used in writing systems throughout the world.[3] 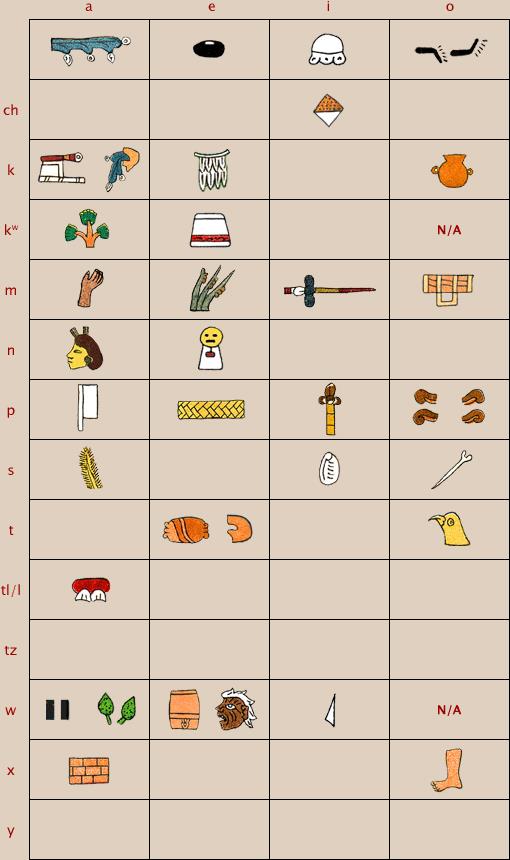 Even after the Spanish conquest, Nahuatl remained an important language. Nahuatl texts represent one of the primary sources from which archaeologists and historians have learned about this ancient Mexican culture, including the people’s social and economic systems and religious beliefs.

Next up: The Etruscans

13 thoughts on “The History of Writing and Reading – Part 9: Aztec Writing”